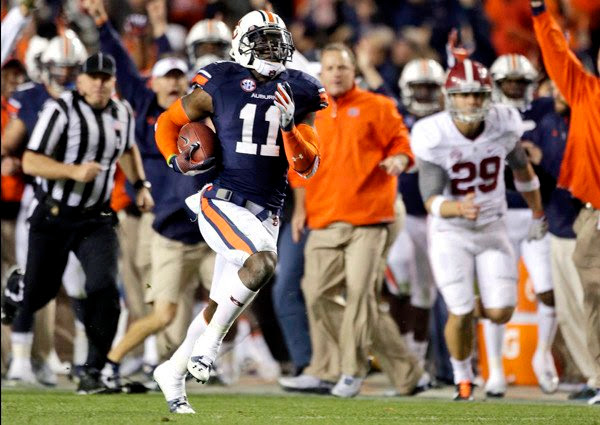 Chris Davis was an afterthought in the recruiting process in 2010. He was a three star "athlete". Chris is one of those diamonds in the rough that former Auburn coach Phillip Lolley finds from time to time. He hails from Woodlawn, a forgotten burrough of Birmingham. Their little town there doesn't have much. They share a football stadium with half a dozen other Birmingham schools on the east side of town.

From that little neighborhood to Auburn and Tuscaloosa, and everywhere else in the world of college football, Chris Davis's name is now legend. You will never forget where you were that night. I won't. My ticket stub from section 42 will be framed soon.

Then there is the indisputable fact that Auburn will break your heart. She's broken mine more times than I can count. But I found myself misty eyed after the Marshall to Coates TD. I found tears rolling down my cheeks when I looked out onto Jordan Hare to see a sea of orange and blue clad fans storm the field after Chris Davis became a legend. It was one of those moments in sports that we long for that almost never happen.

And then it happened. And it is seared into your memory forever. And you are emotionally invested again. Just like that she has pulled you back in.

The game was everything a sports fan could ever want in terms of high drama. Alabama punched and punched and knocked Auburn down. Time and time again Auburn got back up.

Then the drive to tie the game. A drive with all running plays, save one. Marshall is not a passer. Surely that is what two Bama defensive backs must have thought as a wobbly pass found its way between them into the waiting arms of Sammie Coates. Sammy turned and ran with nothing but green grass ahead. At that moment I knew we would win. These guys are magic.

But I figured, like the rest of the 87,000 and changed inside Jordan-hare, that we would win in overtime. Auburn had solved the riddle of Alabama's defense, and they would have to go into the extra frame without a placekicker they trusted. I liked our chances to be sure.

But overtime never came, and for a brief moment when the review booth gave the Tide just one more second, I thought our hearts would be broken again. One second was all they needed to do something. One second.

That one second on the clock allowed Nick Saban to run out a placekicker that had not seen the field in the Iron Bowl. He would try a field goal of 57 yards. Oh Nick, pride and arrogance is a weakness. You learned that Saturday night. A guy who is arrogant enough to go for it on fourth and 1 instead of kicking a chip shot field goal to go up ten is surely arrogant enough to think his freshman kicker can make a 57 yarder.

As that one second ticked to 0:00 the ball fluttered short and to the right. Chris Davis was waiting.

Before the kick a lady behind me, probably in her 60's asked what number 11 was doing standing in the endzone. I leaned back and said he can return it like a kickoff if it is short.

Chris started right then veered left. And a wall formed. And no one in white was even close. Alabama's holder made an attempt to reach him at the 45, but instead of preventing history, history ran right by.

Chris ran right to us is section 42. He was mauled by teammates right in front of us. Two arms wrapped around my neck and that 60 something year old woman was kissing me on the cheek, right where that tear was rolling down. I guess I had answered her question.

It was bedlam in the stadium. I've never been in a mosh pit but I would imagine that is what it would be like. Then the fireworks. Then I said to the guy next to me "Boy there's a lot of media on the field."

"Are you crazy man? Those are students. Get your phone out and take pictures!!"

I got my phone out and did a video. Then my battery died. Then I stood and watched. For several minutes I stood there and watched. I could not (and still cannot) comprehend what I saw.

What crazy wonderful drug had I been given? It was euphoric. It was unreal.

It was 2013 Auburn football. And I will never forget it.