Eyes on Auburn: The Radio Show

One month away from my unapologetically, all Auburn radio show along side Justin Hokanson of AuburnSports.com. Airs Tuesdays from 6-8 PM beginning July 26th! Hope you'll join us in discussing and dissecting Auburn Football!!!
Posted by Rob Pate at 2:04 PM No comments: 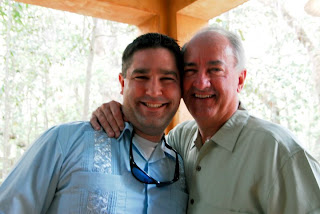 Ted on the right with his son T.J.

Sorry it's been a while since we've posted during this busy summer. I promise I will be back with more red meat soon (and I vow to tear Mr Slime by Brooks a new one).

But for today I wanted to share about a very special person to my family.

I first met Ted Mallory 5 or 6 years ago when his son T.J. married my kid sister. He is jovial, warm, and would literally give a friend the shirt off his back.

He is the true definition of an Auburn man. He actually interviewed for a position the Auburn board of Trustees a few years back. He's a retired Air Force General, which means that he Had little tolerance for my sister tendency to sleep till 11 AM. She used to gripe about how he would come in and wake her at the crack of dawn, which still makes me laugh out loud.

I have had several fun tailgates with Ted over the years. LSU in 2006 when a Brandon Cox sneak was enough for a 7-6 win. Most recently we hung out with Ted and his wonderful wife Alice before and after the Clemson game.

The General and his wife are the most hospitable people I have ever met. My kids love them, too, mainly because they get served ice cream at 9 AM if they want.

I am telling you all this about Ted because I want you to say a prayer today for him and his family today. I may not get to see him this fall.

Ted was diagnosed with stage 4 stomach cancer in April. He is fighting the good fight. His daughter Teddi called him a "hard fighting soldier" recently. After all, what else would you expect from a general?

Ted has touched so many lives in his military career and beyond, including mine. He has raised two wonderful children who are just as giving and caring as he is. I could not have asked for a better family for my sister to marry into.