National Title Review: All there is to say...

You guys are my favorite Auburn team ever. You captured the attention of the whole country, not just college football. Looking forward to the future...War Eagle Forever.
Posted by Zack at 7:01 AM 1 comment:

The Title Preview-They Haven't Seen the Likes of Us 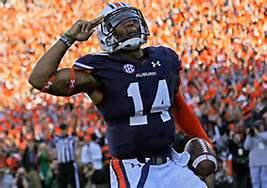 Let me first say for the record, I am utterly shocked that I am writing a preview for the National Championship game. Back in August, I was thinking Outback Bowl or Chick Fil A would be a huge step for this program.

We ended last season in the doldrums. Forget that, worse than doldrums. Auburn was the lower 9th Ward post Katrina. We, I, thought that the damage done by the end of the Chizik administration would not be reversed for at least three years.

Enter Gus Malzahn. He was the architect behind the 2010 National Title. He was the one who went to Gene Chizik after the 2010 Clemson game and told him to turn Cam loose. Gus is a star. Gus is changing college football. Think I'm wrong? Did you happen to catch Oklahoma go hurry up several times in the Sugar Bowl? By the end of the game Bammers were so frustrated that Bammer moms were diving from the upper deck onto to Sooner fans.

Malzahn does not like being called a genius, but in terms of college football, he is Einstein. He is Copernicus. He is Sir Isaac Newton.

Whether you call this a team of destiny or a team of density (I miss the Joe Cribbs Car Wash) this is the most amazing Auburn football team we have ever seen.

Our old friend Rob calls this Buster Douglas vs Iron Mike Tyson (I miss Rob on this blog). He is not far off. Again we see very few people outside of the Loveliest Village that give Auburn a shot. We have read this novel before. First back in October at College Station. Later with back to back road trips to Fayetteville and Knoxville. Then at home against Georgia. Then two weeks later against the mighty Tide. Finally in Atlanta against Missouri. Auburn has been counted out time and again. Time and again Auburn has proven pundits to be wrong.

Auburn will win tomorrow. Florida State hasn't seen the likes of us. They have made a living off of the Wake Forests and Syracuses of the ACC world. Auburn has wins against the crème of the SEC. Florida State biggest win came against a team that lost by 14 points to an SEC East also-ran.

Still, Auburn is currently a 10 point dog. Will Vegas ever learn?

Auburn will win tomorrow. Florida State will not be able to handle Tre and Nick. Sammie and C.J. Dee Ford will solidify his NFL stock. Carl Lawson will become a household name.

This team is the reason why I love sports. They are the Boston Red Sox to the Crimson Tide's Yankees. They do the impossible. They win when no rational person gives them a chance.

One more guys, come on.