Just a few months into a coaching change, Auburn turns into Blue Chip U 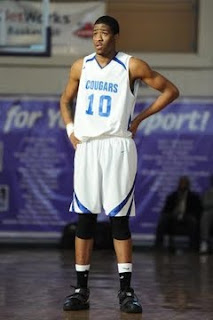 Bryan Matthews reports today that Luke Cothron will sign with Auburn tomorrow. He is a top 100 player with offers from UConn and Tennessee. Cothron averaged 30 and 13 this past season and should make an instant imapct for Auburn.

So for Rob and all any other football first folks (not saying there is anything wrong with that) that might not be paying all that close attention, a recap:

I am of the opinion that in college hoops today, a team can get to the Sweet 16 by and large on talent and just playing hard. Final fours are a combo of great coaching and players (see Duke Blue Devils, Michigan St, etc).

Tony Barbee has taken a huge step in the right direction with going out on the now defunct Tiger Prowl (middle finger extended to you NCAA) as well as actually going out amongst the student body and asking them to be a part.

All of a sudden I am seeing enthusiasm for basketball at Auburn again after 10 years of shear apathy.

I still think Barbee needs a couple years, but look for a vest improvement over Lebo's brand of basketball.
Posted by Zack at 2:14 PM No comments: