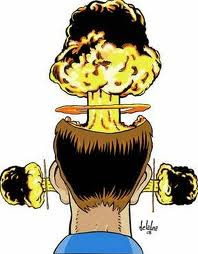 At some point picking on Auburn will become passe.

Since the Clemson season opener last labor day weekend, we have had to endure the most miserable season of Auburn football and basketball in my lifetime. We felt the humiliation of the Iron Bowl. We seethed at Marshall Henderson's jersey flipping. At this moment we watch our once proud baseball program in the SEC cellar.

And then one of our own produces a poorly written piece of garbage* by feigning for Mike McNeil, using feigned concern to garner quotes from his former teammates, twisting words, creating an agenda against her alma mater. Bake at 375 and you get this steaming pile of horseshit from Selena Roberts on her roopstigo blog.

That's alls I can stand. I can't stands no more.

Fortunately, other than ESPN and douchebag at law Clay Travis, most of the sane world takes Ms. Roberts with a grain of salt. Why? mainly because of that pesky Duke LaCrosse thing she totally botched. Getting the story wrong was not so much Ms. Roberts fault. The incendiary commentary and refusing to admit a mistake is. But then and now, she stands by her reporting.

The problem is, at least in this instance, no one else does.

All of her on-record sources (other than the guy about to be tried for two counts of robbery) have recanted, said their words were twisted and that they were mislead by Ms. Roberts on the actual purpose of the story.

Then there's the whole Auburn University was in cahoots with Auburn police, but AU police were out to get black players portion of the story (quotes disputed by source A.C. Carter). Not to mention the harebrained theory that Chizik threw McNeil under the bus to silence him. Huh?

It's time for these awful horrible no good P.O.S.'s like Roberts, Thayer Evans, and Pete Thamel (nice work on promoting your story on the Ware kid two seconds after he broke his leg) to be held accountable.

Sadly, they will not. There are no ethics in a profession where blog hits measure success.

Nothing highlights that statement more than the colossally stupid ESPN the magazine's 'spice' article. To paraphrase Bill Shakespeare, this "six month report" is a tale told by an idiot, full of sound and fury, signifying nothing.

Auburn was the first of the SEC schools to test for synthetic marijuana, in January of 2011. Parents were called and letters were written, according to our friends Hoke and Tate at AU rivals. The Auburn Athletic department has records of 50 phone calls and a letter to the parents of the kids mentioned in the story.

Consider that for a moment, then consider that the drug was not made illegal by the state of Alabama until August 2011. The NCAA did not even warn its members about the problem with synthetic pot until December of 2010.

It's Monday, and most of the world has moved on to something else. Nice try, Selena.  E for effort, WWL. Auburn still stands. And we will continue to do so.

*I found that article very poorly written, aside from it being a hit job.  When you are a 'journalist' and you don't write as good as half of the bloggers I read (including one that was one of those dumb cheating Auburn football players Ms. Roberts like to smear), maybe you should look into a new profession.Maybe Ms. Roberts should try "crack-whoring", seems like it would be a nice fit.
Posted by Zack at 6:53 AM 1 comment: