His next tweet was something about the sky being blue and water being wet. 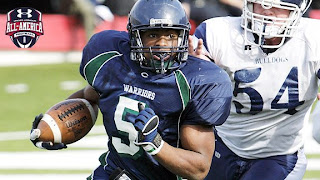 *Newton will be named the starter. Is he great? Have no idea but the spring game is no measuring stick of which to judge. Secretly I believe he's been named the man and A-Day was merely a chance for Trotter and Caudle to battle it out for the back-up slot...and my nod goes to Trotter. I like Caudle and the way he carries himself and think Auburn could win with him behind center. Trotter though has that gun-slinger, arrogant, Matt Leinart air about him. He's just a winner and I could easily see him winning the battle for number 2. Keep in mind that under the direction of Gus Malzahn, Chris "Dead-Arm" Todd broke virtually every Auburn passing record last season. The Point: We are in good shape at quarterback no matter who lines up there this fall.

*Offensive line will be a veteran group with capable back-ups for the first time in quite some time. This group will be fantastic.

*WR's are loaded. Biggest challenge will be keeping egos in check and finding roles for everyone when the football is not in their hands.

*At running back Michael Dyer needs to grow up in a hurry and be the beast he appears to be on youtube. I've always been a fan of Fannin, but Mario is prone to injury and fumblitis. Don't see Mario carrying the load for 14 straight games unscathed. A Fannin/Dyer/McCalebb punch is nothing I'd enjoy preparing for or attempting to tackle all night long.

*On defense, it's all about scheme. My prediction is Coach Chizik takes more of the defensive scheme under his wing and allows Malzahn to basically run the offensive side of the ball on his own. Depth will be improved along the front seven. We will be loaded at safety and thin at corner, but Demond Washington at one corner will be one the best in the league. Also important will be having the likes of Jess Curry, LaDarius Owens, and Jake Holland cover kickoffs and punts instead of Darvin Adams, Terrell Zachery, or insert walk-on receiver.

*My spring prediction for next season: 11-1 and a trip to Atlanta!

*A well-deserved congrats to the members of the All-Decade Team voted on by the fans. Especially Dr. Z's all-time favorite safety, Will Herring....way to represent Will!!!!
Posted by Rob Pate at 8:06 PM 2 comments: 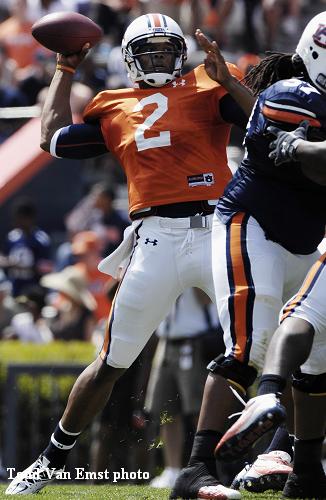 Another spring. Another game.

As I try to temper my excitement over the upcoming season, I am reminded there is nothing better to lower said excitement than an A-day game where the starters are limited and walk-ons get a lot of P.T. Most of our every-down guys played sparingly, leaving it to walk-ons and/or third stringers. Still, I wanted to throw my two-cents in on what I observed on the U on Saturday.

Mario will be better than Ben Tate. Mark it down. He's better laterally, has better hands and I would argue faster than Ben. Considering Ben is a very good back and will likely be a first day guy in the draft this week, that is a pretty good sign.

O-line should be improved. Considering they were paper thin depth wise in 09, the offensive line did a great job. Now with added depth and likely an upgrade at right tackle, I think this group may be one of the best units in the SEC.

Cam will be the starter. Just based on the fact they didn't let him do much in the spring game, and well, the obvious that he has the next Dante Culpepper written all over him. It will be Cam Newton taking snaps next season. That being said Caudle and Trotter and even Mosley looked pretty good too. Any of these guys would compete for a starting job at somewhere like Georgia or Ole Miss. Much of this has to do with....

Wide Receiver=pure awesomeness. Best WR unit at Auburn maybe ever. Any QB will be lucky to be out there with Trooper's receivers. They do the little things so well. Routes are run to perfection. They block well, etc. This is by far our strongest, deepest group.

Defensive Line looks improved. Even though the starters played semi-sparingly, they did well, especially Antoine Carter. This should be a deep unit, with more help coming in Bonomolo and company getting here this summer.

Linebackers-Steady as she goes (Toro aside). Bynes, Stevens, and Evans continue to impress. Eltoro...meh. Do we call it Eltoro's disease or Blackmon's syndrome? I also think this group will upgrade when the new group arrives this summer.

Defensive Backfield? Hard to say what will become of this group. Will Savage and McNeil be 100%? Will Zac Ethredge make it back? This group could be anywhere from great to just OK. I wish I had a better grasp here of exactly what this unit will be.

Special guys. Byrum will likely be on every pre-season awards list. But other special teams questions in no particular order: Can Shoemaker return to his freshman all-SEC form? Can our punt return team crack the top 100? Can we find someone to kick the ball inside the 15 on a regular basis?

I said a few months ago, 10 wins is a real possibility. I still believe that, given the schedule and the fact that we are still overlooked a bit. Arkansas appears to be the upcoming media darling for '10 (see Ole Miss '09). I like where we are as a group. A few bounces here and there and it could be a special season.
Posted by Zack at 12:16 PM 2 comments: