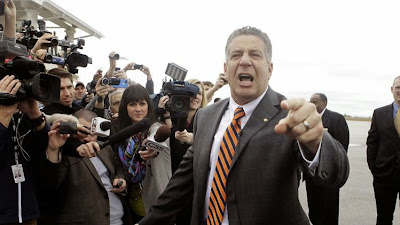 He wants you! (In Auburn Arena)

In hindsight, Tony Barbee and John Pawloski were pretty lousy hires, too. But at the time, those seemed like pretty good pick ups. Both had big success at mid major programs. Both were up and comers.

Jacobs finally has come in to his own as an athletic director. He hired the best coach in the country in football in Gus Malzahn. All Gus did in year one was take a mentally whipped football team and turned them into an SEC champ seemingly overnight.

Sonny Galloway has changed the culture of baseball pretty quickly at Auburn. He inherited a bunch of prima donnas whom needed to be whipped into shape. After a rocky start, Auburn is on the cusp of the top 25 with a 15-7 record, having, at this point, played the toughest schedule in the SEC.

March 18th trumps both of those previous hires(yes,even Gus Malzahn).

Bruce Pearl is one of the top 5 basketball coaches in the country. He is right up there with Coach K, Jimmy Boeheim, and Tom Izzo. He will bring instant credibility to the program. He is a fantastic recruiter. His brand of basketball is exciting and up tempo. He is also a showman. Last night's welcome reception is a prime example.

For the first time in over a decade, I am excited about Auburn basketball again. Not since Mamadou, Smith, Doc, CP, and Scotty have I been so excited. I was a student then, when the old Beard-Eaves was filled to the brim with over 10,0000 to see Auburn destroy Arkansas, Florida, and Alabama.

I expect that again very soon.

Pearl revamped Tennessee in one season. UT went 14-17 the year prior to Pearl's arrival and lost their leading scorer to graduation. Sound familiar? We may not make the NCAA tournament in year one, but we will be competitive. I can promise you that much.

Look for an instant rivalry with Kentucky as well. It is pretty well known that Bruce Pearl and Calipari hate each other, dating back to the UT-Memphis days. Throw in some added hatred that Cal will have for AU since they fired his protege. Also don't be surprised if Barbee winds up an assistant at UK in the next year or two.

Auburn is the hot school right now in college sports. Jay Jacobs, for all of his face-planting failure over the first few years in the A.D.'s chair, deserves credit for making the biggest splash we have ever seen in college basketball.

Now we can be excited about Auburn basketball again. We can even dream of an SEC championship and the big dance. Hopefully very soon.
Posted by Zack at 7:19 AM No comments: