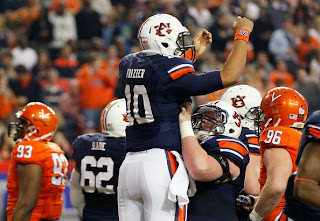 Now that BVG and his pornstache are in town fixing the AU defense, our thoughts now turn to who will run the Auburn offense in 2012.

Speculation is out there that Chizik has a guy in mind that is currently coaching in the NFL playoffs. I keep hearing Greg Roman of the 49er's might be one guy Chiz has in mind, but he is also rumored for the Penn State job. Better be ready to put up some points in you're headed to PSU, Greg.

The debate goes on whether or not Auburn should switch to a pro-style offense or stay with the spread. I really think Coach Chiz is leaning towards going back to a pro-style offense, and evidence points to that with the addition of an all-American fullback Jay Prosch, who, if you don't know by now, decided to transfer to be closer to his Mom in Mobile who is battling cancer.

I speculated about a former AU OC that now coaches at Michigan. I think Borges would do well back on the plains. His problem wasn't X's and O's, it was Jimmy and Joes, as he once said. Having great talent does not appear to be a big problem with the current recruits Auburn continues to sign. Borges did an outstanding job this year with Denard Robinson. I really wish we could get him back, though I doubt he would come.

It should be an interesting couple of weeks for Auburn. An exciting hire will likely ensure another great recruiting class for the Tigers.
Posted by Zack at 7:25 AM 2 comments: 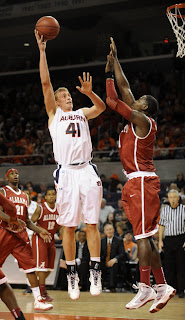 After opening the season with losses to arguably the two best SEC teams, Auburn bounced back to win a tough game at home to Ole Miss in overtime over the weekend. Tonight the Tigers go on the road again to face a suprisingly tough LSU team.

Tony Barbee may have found the right fit against Kentucky last week. The Tigers switched to a match up zone the gave the Wildcats fits all night. And judging on what I've seen from college basketball in 2012, no one seems to have a decent zone offense in the SEC, so I think the Tigers have a good opportunity to be successful.

Offeensively, Auburn suffers from shooting woes, especsially if Frankie Sullivan is cold. Rob Chubb has been inconsistent all year on the post, but he is palying better recently, as long as he can stay out of foul trouble.

All in all, this team is so much better than last year's version that we have to be pretty optimistic about the future of AU hoops. Tony Barbee contiues to bring in top shelf recruits that wouldn't have even bothered when Jeff Lebo was coaching the Tigers.

I still expect a rocky rest of the season, especially on the road, but look for Auburn to be very tough at home.
Posted by Zack at 12:55 PM No comments: 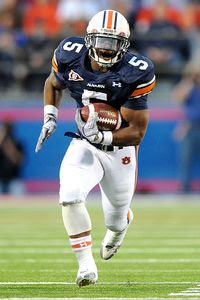 I am the proud papa the most football savvy four year old girl in the world, so this morning on the way to school, I broke the news to her that Michael Dyer was no longer an Auburn Tiger. I thought our conversation pretty much summed up Dyer's two years at AU. I wish I had recorded this it, because this is the way it went:

"Janie, I have some bad news...Michael won't be playing football for Aubie anymore."

"Why Daddy?" she asked. "Is he going to play with Nick on the Blue Lions?"

"No, sweetie," I replied. "Coach Gene told him that he couldn't be on the team anymore because he wasn't being a good teammate."

"What does not a good teammate mean Daddy?"

"It means that he wasn't nice to the other guys on the Auburn team. He wanted to have the ball all the time, and complained when he didn't have it."

"I don't know baby, but Michael didn't want to share and he thought he was better than the rest of the players."

"Maybe Coach Gene will let him come back," she said.

"I don think so Janie. Coach Gene gave him a chance to say he was sorry, but he wouldn't. So he's not coming back. He even thought he was better than Cam."

Here's mild mannered Barrett Trotter around the beginning of the year... 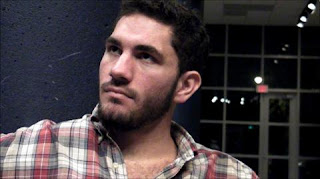 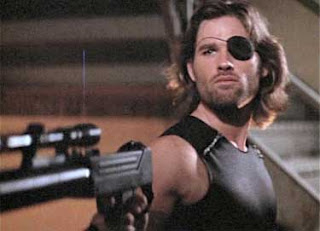 It's amazing what a little time off will do for a guy. I'm so proud for Barrett for staying so even keeled throughout the season. Somewhere in the Clemson game he lost all confidence, somewhere in the Georgia Dome he found it, and Auburn has some serious momentum going into 2012.

So for a little while let's forget about coordinators, Mike Dyer, and two arch rivals playing each other in the game that belonged to us only a year ago, and savor the flavor of the best game our Tigers played all year.

Passing thoughts...
-The defense still has a ways to go, but all in all they looked much better fundamentally on New Year's eve, especially in the second half. Maybe Chiz should pull a Saban and coach the defense while having a figurehead in place.

-Happy trails Guz. It has been a roller coaster. We all wish you well in Jonesboro Arkansas, wherever that is.

-Anyone else miss Mike Dyer the other night? Me neither. As the O-line grows up, I think we'll miss Dyer less and less if he chooses not to return.

-Virginia's defense is SLOW upfront. Barrett Trotter moved around like he was Andrew Luck (who may be the ugliest white man I've ever seen, but I digress). That #31 ranked defense looked pretty suspect to me.

-Do you know how ridiculous it is that a guy as big as Angelo Blackson can get back there to block a punt? He must a a freakish athlete.

War Eagle everyone.
Posted by Zack at 12:42 PM No comments: