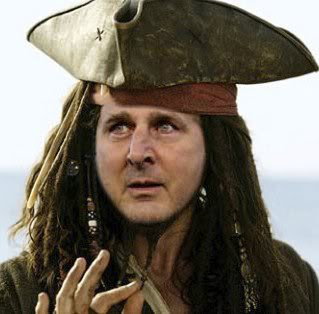 Walk the plank!! On second thought, lock him in the equipment closet for a couple hours-Mike Leach

Mike Leach is an intriguing dude, whom I actually like. He's quirky for sure, which we can blame on Hal Mumme, I guess. He obviously turned Tony Franklin into raving lunatic who lived out of his car for a while. It's just me personally, but I would rather wind up a pirate than a vagrant.

Leach is most famous for his spat with Craig James over Leach's treatment of James' son. Leach locked him in a broom closet for a few minutes, and Craig went all pony express postal. Leach got canned soon after and Craig ran for U.S. Senate with a campaign war chest full of money he got from boosters from when he played at SMU. I think Craig got like 3% of the vote.

As mentioned,Leach has a pirate obsession. Some guy from ESPN even wrote a book about him called Swing Your Sword. I have no clue as to why he has a pirate obsession. I wanted to dress up like a pirate for Halloween when I was 7, but I grew out of it. Who in their right mind would want to be a pirate? I mean, have you seen the way those Somali guys live? They look like they haven't eaten in months: 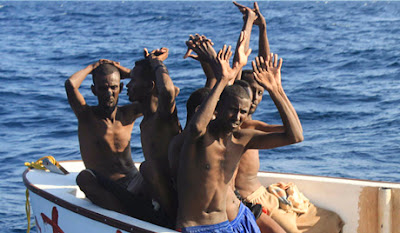 We Surrender! Now can I please have a sandwich?

Leach is a good football coach despite his obsession with raping a pillaging. I expect Washington State to be better than last year.

That being said, I expect Auburn to be much better in 2013 as well. Loaded with talent, this team just needs some leadership, that and remembering what it feels like to win. I expect to see lots of newcomers play Saturday night. I also expect we'll be talking about some new stars come Monday.

The Cougs passing attack gives us some trouble in the game, but Auburn's offense is a juggarnaut. Listen to me rave about the offense and we haven't even seen it yet.

By the time it's all said and done Leach will be begging for Davy Jones' Locker.

Game Week-Hope is a Good Thing 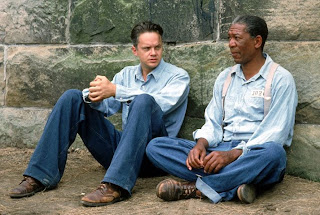 After nearly 10 months of utter despair, Auburn is set to tee it up again Saturday when they take on the Washington State Cougars. We have seen just a few changes to Auburn football since last November. We have also had some changes to the blog.

Rob is of course no longer with us. No, He didn't die. He now requires you to pay to read his commentary about Auburn football, along with his Eyes on Auburn podcasts. Both are worth asking price. You can also catch him on Yahoo Sports, doing live game commentary with former Auburn coach Jack Crowe. We'll miss Rob around here, but I will continue to keep you all mildly amused. Remember I'm funnier when we lose. I hope that when reading the 2013 blog none of you have to laugh.

I am on the fence on how well Auburn can do this season. I think we have a fairly high ceiling as far as wins. But I, like many of you have a ton of questions...

Will the front 7 be any better than last year? They better be. I mean, how can they be worse? I have major concerns about the defensive line. All those can't miss guys Gene Chizik signed back in 2010? Well, they have kind of missed so far. I swear I got a migraine the other day when I said they haven't nailed down a starting group yet, and may not know till late this week. I do have a great deal of faith in Rodney Garner. He has spent his time, I am betting, toughening up a group that has been flat out soft since Tracy Rocker left to coach in the NFL. At linebacker, we have some unproven guys for sure in Kris Frost and Cass McKenzie. Jack Holland has experience, but has been, and let's be kind before the season starts, unspectacular. But many of his shortcoming have more to do with the fact that the defensive line hasn't done its job over the last two years.

Will the secondary cover anybody? I watched several games with a former AU defensive back who now works for Rivals. He would become visibly ill when watching AU's pass coverage, tackling, and overall ineptitude during the Chizik era. I have to think that gets better too. We are thin in some spots, so if the injury bug bites, we could be just as below average here.

How fast will we go? Probably the most interesting thing about the new staff and new system is the ludicrous speed offense. It is enough to have Bert Bielemma and Nick Saban worried about it. Bielemma seriously feels like the HUNH puts his players in danger of more injuries. Well, we can agree on one thing Bert, you are no comedian. Whether you can coach football in the SEC or not remains to be seen. I cannot wait to see how Gus runs the offense with the handcuffs off. Chizik probably cost Auburn 2-3 wins in 2011 by ratcheting back the offense to protect an awful defense. By the Iron Bowl, Gus was probably wishing he still worked for Houston Nutt.

Is Nick Marshall the next Cam? Let's see. How can I answer this? In a word-No. He's not even close to being the physical runner Cam was. He has the big arm. He can make plays with his feet. But reality check-he's not Cam. That being said Gus took a one armed zombie in 2009 and won 8 games. Auburn's offense will be fine. The run game and the offensive line should be solid. As long as Marshall doesn't turn the ball over, the sky is the limit for this crew.

The most important thing AU has going in to 2013? Hope. We have hope that we can return to the peak of college football. Maybe not this year, but soon. And as Andy Dufrane said "Hope is a good thing."
Posted by Zack at 7:34 AM 1 comment: