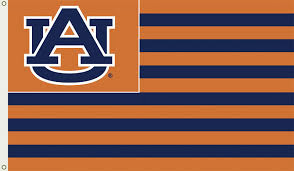 If Auburn loses, the terrorists win.

The eyes of the nation will be on Jordan Hare in less than 24 hours. Most of those, I would argue a vast majority, will be pulling hard for the orange and blue.

The nation is sick of Bama. Tired of Nick Saban and his condescending tongue-lashings. Sick of what even the man's wife says are spoiled rotten fans.

The time has come for the the Tide to lose. Democrat or Republican, Red State, Blue state, it does not matter. They all say War eagle this weekend.

How does Auburn do it? The same formula holds true. Run the damn ball. Play action. Trick em. Out flank em. Be fast. Hit hard. The stadium will be jacked...and loud.

Oh will it be loud.

Defensively, Auburn must get to McCarron. Hit him. Rattle the cockiness right out of him. Dee Ford needs to know what his brand of cologne is by the time this thing is over.

Hit Yeldon. Hit him hard. Make him rue the day he flipped his commitment two years ago. Stir it up. Play with swagger. Bama does not believe Auburn is back. We have had to hear it on talk radio for two weeks. Serve. Them. Notice.

They will know quickly come tomorrow, that we are back.

It might have happened in the blink of an eye, but here we are. The Tide has to go through Auburn now to get to Atlanta. In our house. They are nervous as hell about November 30th at 2:30 PM, take that to the bank.

Win this game. Defy all odds. Defy every football pundit.

Win for Auburn. The nation is behind you.